Pipe Up and be Heard! 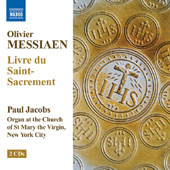 At last! A solo pipe organ recording attracts recognition and wins a Grammy award. In February 2011, the Naxos recording of organist Paul Jacobs' performance of the "Livre du Saint Sacrement" by French composer Olivier Messiaen was awarded the trophy along with the added label of being the first, for an organ recording, to receive such an award.

The number of pipe organ recordings on the market right now is astronomical. The number of recordings of the organ music of Bach alone is astonishing. The number of high quality labels devoted to new recordings of the king of instruments is high, and the number of websites dedicated to information and research about pipe organs all over the world is also very high. More reason to wonder why, within the recording industry itself and all of its affiliated businesses, magazines, websites and retail outlets, talk of the pipe organ seems to be reserved for organists, shelf space in retail outlets is always limited and tucked away in a back corner, and media attention is always focused on the latest star conductor or the youngest new soprano.

Hopefully this turn of fortune will focus attention on the organ as a versatile musical instrument and not something one hears only during church services.
Ironically, the music of Olivier Messiaen, although loaded with religious meaning and liturgical associations, was composed and created to be performed as concert pieces, and not played within the context of the church. 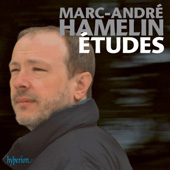 This recording by Paul Jacobs was up against some fierce competition in the category of classical instrumental recording, including an impressive new recording by Marc-André Hamelin which I thought for sure would take away the prize. This Grammy win was certainly a pleasant surprise for me, and hopefully it will generate an increased awareness of Messiaen's music, and focus attention on organ music once again, and help reinforce the recording career of this fine new organist. 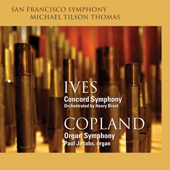 Jacobs has already released a new recording in February of 2011. It is an impressive live recording of the Organ Symphony by Aaron Copland, with the San Francisco Symphony Orchestra conducted by Michael Tilson Thomas. This review will give you more information on the recording itself.